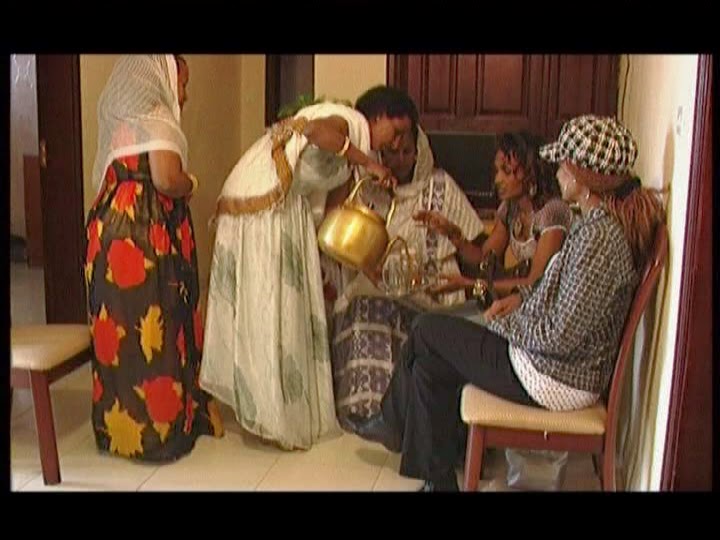 Title: “Men’yu Tehatati?” (“Who’s Responsible?”)
Directors: Elsa Kidane and Gizenesh Menghis
Running Time: circa 1 hr. and 40 mints.
I saw an advertisement about a film written and directed by a woman indicating that the director was the first woman to have explored film production in the Eritrea. Although I had seen another film directed by a woman, the ad made me wonder why it used that last info – first woman film director – as its catchy phrase.
Notwithstanding my stand about women’s ability compared to men’s, I wanted to check it out at first hand. I expected a change of attitude about presentation of women in artistic productions. I went with high expectation to find it to be unlike the products of men that portray women for their physical look or from the perspective of men only.
Many films in Eritrea include women in their scenes as objects of attraction that show their physical being. It is often witnessed that the films give less value to the women’s minds. We have hardly seen women who are assertive and strong in advocating their rights. They are usually depicted as lamenting and begging for love. Most of all they give blind eye to many big excruciating issues in the lives of women in reality.
“Men’yu Tehatati?”, however, has tried to strike a small chord in the reality that touches on the lives of women. The straying behaviour of married men which is taken for granted but has consequences on the lives of the people involved is its main subject. That kind of behaviour has been very common amongst some men; and those who shoulder the biggest consequence have been the mistresses and the children born out of wedlock.

This film reveals that the women involved in an extramarital relationship with married men are very often faced with dire economic situation, and that those who get the slap of that kind of situation the most are the children born from the relationship – while they are children or when they become adults. It also shows that women who are not assertive in what they want ultimately risk their lives to be dictated by men.
As the issue is brought to us in a work of film, another important thing here is its treatment in its production. Most of the cast involved in the film are experienced actors. It is to be noted that the actors’ audience appeal, acting ability and experience as important elements in casting; however, most importantly, actors’ suitability for the characters appears to decide who should take a certain role. As such, there seems to be a casting mismatch in the selection of the main character Senait and her friend, acted by Helen Meles and Lia Bairu respectively. Helen and Lia could be considered commendable in their acting abilities; nonetheless they were not fit for mid-20 aged women for which they were meant to act.

The acting of almost all of the actors was praiseworthy. Amleset and Lemlem (Tsighe Techlesembet and Gizenesh Menghis respectively) were excellent as ever. Amleset’s suspicions, sadness and hopes could easily be felt by the audience. Tsehaye (Efrem Ghebrehet) was convincing as he was also very fit for the role. Senait’s depressed behaviour carries the mood of the film to the ending. With all the best performances the cast put together, we find some faulty usages of dialogue which sound to be awkward: like when Samson (Eyob Habteab) calls his girlfriend Ruth (Elsa Kidane) on the phone and during their conversations when they go out to dine, we find the dialogues unnatural. They do not sound as people who are in love but people talking about business dealings, especially when they do it on the phone.
This last point could raise the issue of directing. It was a good decision to have two directors for the fact that Elsa the writer and probably the first director was also acting herself. Therefore, it was important to have another director who could make important decisions on scenes in which the first director acts.

There are some elements that were not shown in detail. They were revealed by hinting them in such a way that they are not left obscure but understood easily: the directors did not kill time to show Samson asking Senait for marriage and very briefly they revealed that they spent a night together in Massawa. Moreover, it was easily understood that Senait regretted her spending the night with him – not in long conversations but facial expressions. These were some good techniques employed on the part of the directors.
Eritrean directors often choose shiromeal to imply that the household is poor. There were enough clues in Senait’s family that suggest how poor their household is. Probably serving shiro may not have been necessary as their tiny room, their furniture, the compound they live in… would help the audience to gather enough clues about their livelihood.
In the scene where Senait and her mother have their shiro meal for lunch, Senait comes from work. She just sits on the couch and takes off her earrings; she just eats without washing her hands while Samson goes to the bathroom telling Senait and her friend that he was going to wash his hands (in a scene where three of them dine at a restaurant). If the directors intended to show something through these contrast, it would only be preposterous.
The ending scene was very rushing and hard to believe it. The revelation that Samson had broken his promise to Senait and was getting engaged to Ruth was interesting. What transpired after that could not be harmonized with the reality the film tries to set. The uncovering of the secret Amleset and Tsehaye kept for 25 years would have been believable had it been done by Amleset herself instead of Tsehaye; because she was getting hurt twice. In addition, the forgiveness shown by Tsehaye’s wife is hard to accept it for it comes following few moments after the shocking news.

I wish the strength shown by Senait at the end somehow came before the she slept with Samson. If she had resisted before she slept with him, or shown tricking her or convincing her with sweet words, the audience would have probably sympathised more with her. Not letting her does that makes her look like a girl who just sleeps with any person she finds. And that just shows only women’s victimization in the hands of men’s recklessness. As women directors, it might be expected of them to show us strong women who are assertive and confident of themselves which are traits many men directors would not give substantial focus.
Although the clarity of picture in “Men’yu Tehatati?” appears to be of medium quality during close-ups, in general shots it seems a projection of a worn-out film. In sound quality, the audience are able to get every word the actors say, but in some scenes the surrounding noise and blowing wind was not controlled.
In costumes, we see suitable choices of costumes in many of the scenes. Similarly, makeup used with Senait and her friend, and the other three elderly women wore dress fit for the occasions they were in. One very minor remark that should be stated her is that a pair of tweezers had passed Amleset’s eyebrows – which is unlike of elderly women. Moreover, Ruth’s costume was so exaggerated that they appeared like designer attires.

One of the most notable accomplishments of the film is that it has used original music composition. Unlike many films produced in the country that use musical compositions from various old songs and foreign films, a professional musician – Yemane Kidane – composed the accompanying music for “Men’yu Tehatati?” Here, it might be necessary to reflect that the music in the last scene was more disturbing to the ear than heightening the effect of suspense which was expected of it.
When viewed in whole, “Men’yu Tehatati?” has raised the issue of women as it was expected to be for the fact that it is written and directed by women. However, the issue is taken lightly while its consequences leave life-long scars especially on women and children. It was right of them to ask “Who’s responsible?” and the answer is very simple – men are responsible. The treatment of the issue in the film portrayed very submissive women and did not strongly rest the responsibility on men. It did not attempt to make the women characters to be very bold to break the trend. This being said, it does not mean that the efforts of the directors should be taken lightly. We hope that many more women directors would follow the footsteps of Elsa and Gizenesh upholding their rights and striving to stir women’s consciousness.
http://www.youtube.com/watch?v=Bkos6NV-tP0

“Hanti Terifa”: A Story on Clash of Cultures