Zelo’yu Zihilu, Collected Poems. Meles Negusse. Asmara, Eritrea: Atlas Printing Press, 2008. i+105.
Anyone with the habit of looking through newspapers has probably read a number of Meles Negusse’s poems. He is well-remembered for his famous poem Armadiona (Our Cupboard) since it said how many families felt when they continuously moved their residence from one neighbourhood to another during the mid 1990s. Many of his poems have been printed in newspapers and those who have made poetry their cup of tea have been familiar with them.
These poems that have been dispersed on various newspaper issues have been collected and published in a book. This book of collected poems titled Zelo’yu Zihilu (He Who is Alive Will be Alive) comprises about 70 poems composed between the years of 1994 and 2007. Its first print sold out right away and went into reprint reaching into many people’s hands and tickling their fancy.
In the preface of the book, the poet has put these about poetry: “Composing a poem begins from the idea of how one understands life, correlates feelings on ideas and ideas on feelings, it is to create profound feelings from high rising towers by salvaging observation on the art of living.” Meles’s observation, like his words above, has been able to dig numerous things which many of us take for granted.
They celebrate love, beauty, nationalism, martyrdom and heroism. They nurse hearts that failed in love, question human nature and moral issues; in general, they talk about life. Enqua’e Bidehan Metsakhi (Welcome), one of the poems that celebrate undying love, is a very imaginative work. The persona in the poem is a dead lover talking to his love who has followed him. It touches various issues which many members of the society would gossip about when one dies after getting ill and emaciated. People think that her death was from HIV/AIDS which the persona denies that it was from missing him. The following stanza creates visual imagery passing on the core of the poem: 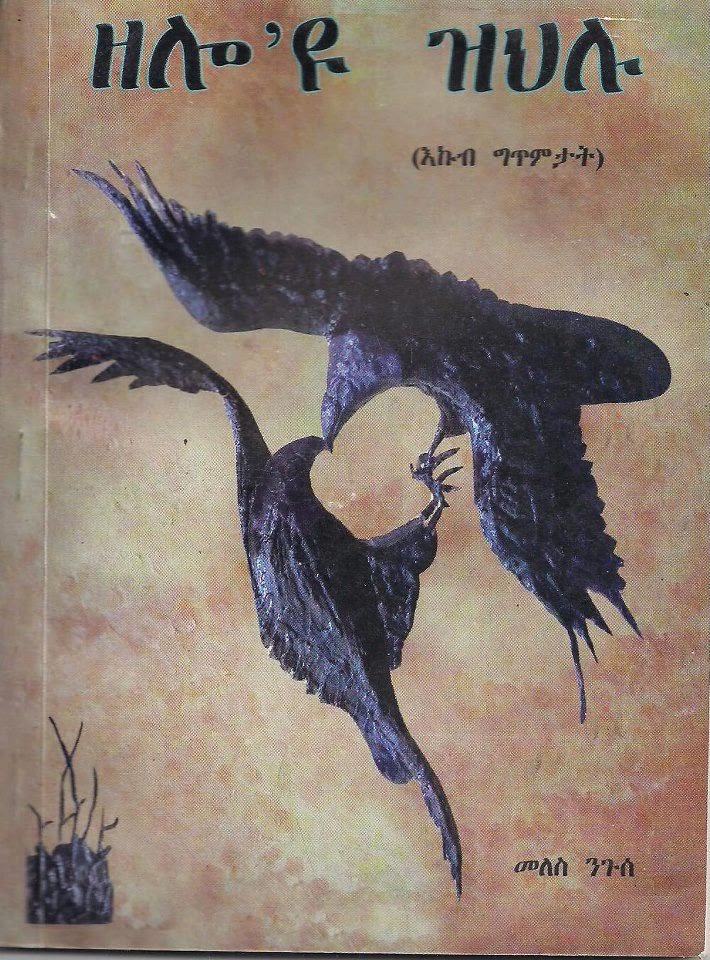 I wonder about those who shouldered your corpse
How they were able to carry in a stretcher your bones
They may think only your corpse they have borne
But you were the whole world all-in-all
Besides your bones, your heavy thoughts
were on their shoulders.
As inquiries on human nature, Meles was able to prove his witty imagination by composing poems that contrast human nature with animals and different kinds of plants. He has used a dog in Kedish Natki Yihaysh, a tadpole in Sebn Winjrn, and wild animals in Ensisa Zegedam in general as well as various vegetables and fruits in Aynet Seb to create metaphors and similes. The analogies and contrasts created by using the animals and plants clearly delineate moral decadence, selfish and imprudent traits of human nature.
In P.B. Shelley’s Defense of Poetry we find these words: “Poets are the hierophants of an unapprehended inspiration; the mirrors of gigantic shadows which futurity casts upon the present; the words which express what they understand not; the trumpets which sing to battle, and feel not what they inspire; the influence which is moved not, but moves. Poets are the unacknowledged legislators of the world.” In justification of these words, Meles in composing Mezmur Deqi-Hdrtna (The Fairies’ Song), Mot Amakhari Delyu (Death Needed Adviser), Seytan Entezmro (If the Devil Could Marry), Merf’e(Needle) serves as a genuine hierophant for the layman who is lucky to read them.
Meles reflects on the fairies’ optimism for the world in contrast to humans’ pessimism. He casts gigantic shadows of the affluent future at present by marrying off the devil with death. Reading Merf’e (Needle) which is personified and is shot with his imagination as far as facing the Creator for judgment, one would be moved.
Zelo’yu Zihilu is not short of elegies for the fallen hero. The breadth and depth of Kal Sema’et, Milen, Merat Gual Siwuatand Ade Sewra do not pass with out touching inner feelings. Kal Sema’et (The Martyrs’ Words) transfixes one’s mind compelling it for self-evaluation; it questions the conscience to put itself in a balance to weigh its deeds; it keeps coming back to one’s mind repeatedly with its swarming queries. 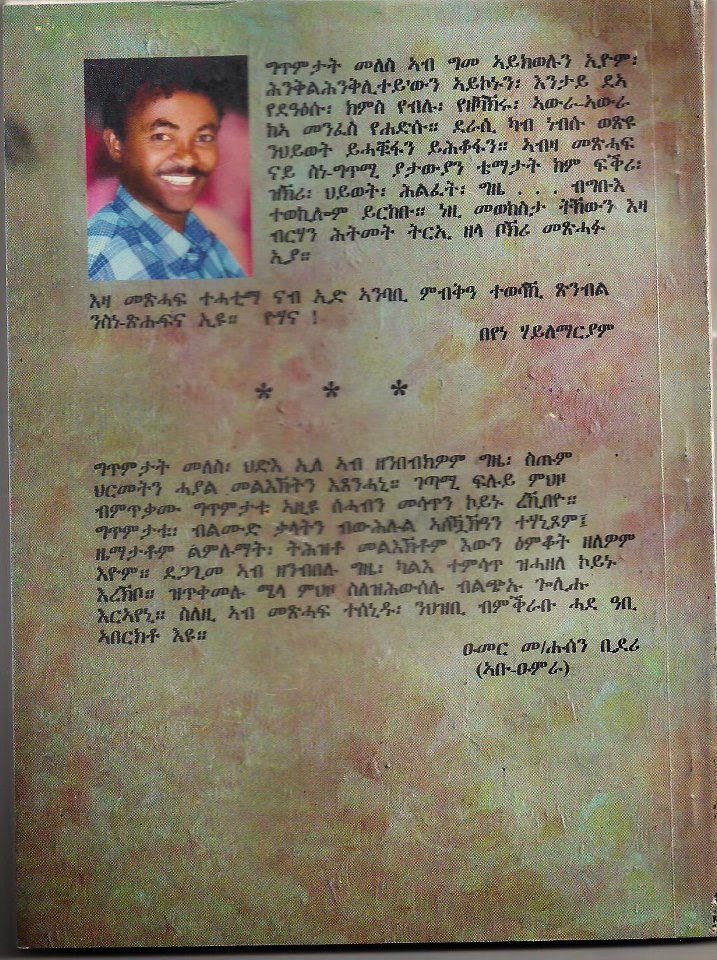 One of his frequent personas in his poems about love is one that talks to his loved one or ex-lover. He begs her to make decisions and amend her manners; he justifies his actions to his lover; he demands explanations for her actions; and most of all he praises her beauty.
The poet also hails beauty in its natural features. In one of the poems, he advises a woman that her beauty is more precious than quintals of gold. He asks her why she would need grams of gold to embellish herself while she is naturally embellished. He also chooses a traditionally brought up country girl for her beauty that needs no make up.
Of society’s moral decadence, Meles has also sharpened his pen. His contrast of the Cathedral and Ambassador Hotel – very well known monuments in downtown Asmara – depict how people defy morality and lead their life with obscenities.
The title of the book is from the title of one of the poems. It shows that love is undying and unconditional. The persona reflects that she was right to leave him for he could provide her nothing but love. He juxtaposes his sadness with her happiness on her wedding day. He again regrets for cursing her saying it was from extreme anger. On the pretext of asking her wellbeing after she gives birth to a child, he visits her to express his nostalgia. He then asks her why her husband died and consoles her saying: “He who is alive will be alive.”
There are also poems that reflect reality at hand. One instance is the poem – Ajoki Yohana– about the readiness and devotion of the Eritrean youths who are defending the nation’s sovereignty. Eta Merat is also another poem that shows the hardship communities went through during the border wars in 2000; it is a painting drawn with words.
Meles’s poems have ideas that surprise, astonish, interrogate the conscience, shoot one’s ideas what real love could mean…. The use of animals, recurring references to death, employing inspirations from various inanimate objects are all spellbinding.
As it was stated by a reviewer during its launch, the page layout of the book is not that much attractive. In addition, the flow of ideas and coherence between stanzas breaks off in a number of poems. A few poems lack proper punctuation; at times one finds a single punctuation mark either a full stop or question or exclamation marks at the end of the poem.
Wild Animals 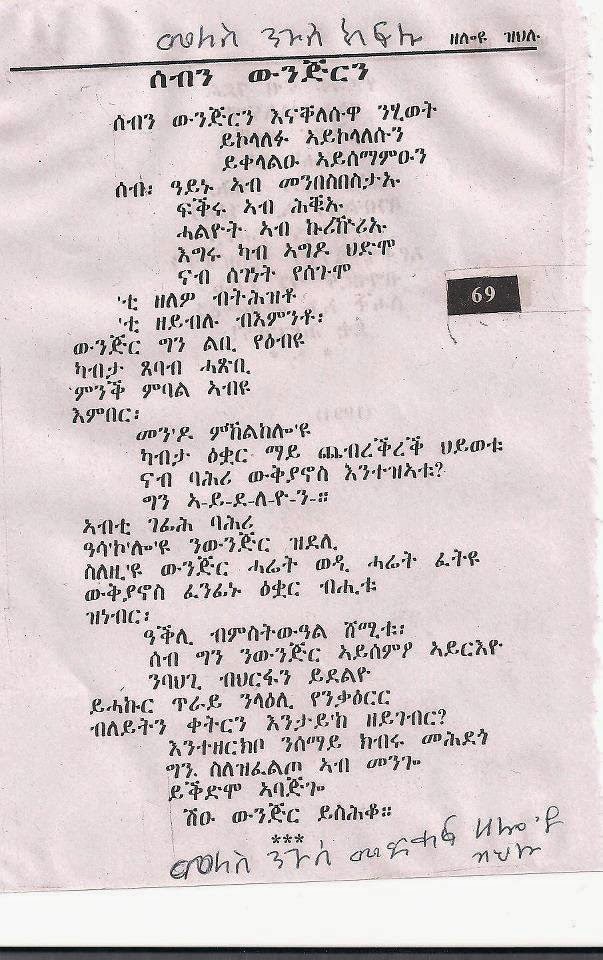 What are you running away from?
Where would you like to be?
Forget your jungle
And come to the city.
Not even one bush remains
Back there. Enough thunder
And the ground always shaking.
Here you can take it easy.
Look, the gate opens.
Leave your fear outside.
Welcome.
Young or old, women or men –
No one should be denied
The comfort of civilization.
Or has the jungle
Already seen it come,
Leaving mines instead of trees
And trading your sulfur
For the breath of freedom?
Better take the city instead
And let that wild man
Sniffing blood
Live the way you used to
But not any more –
Eating his own kind
Dead or alive.
He can have your place.

By: Meles Negusse (taken from Who Needs a Story? By Charles Cantalupo and Ghirmai Negash) 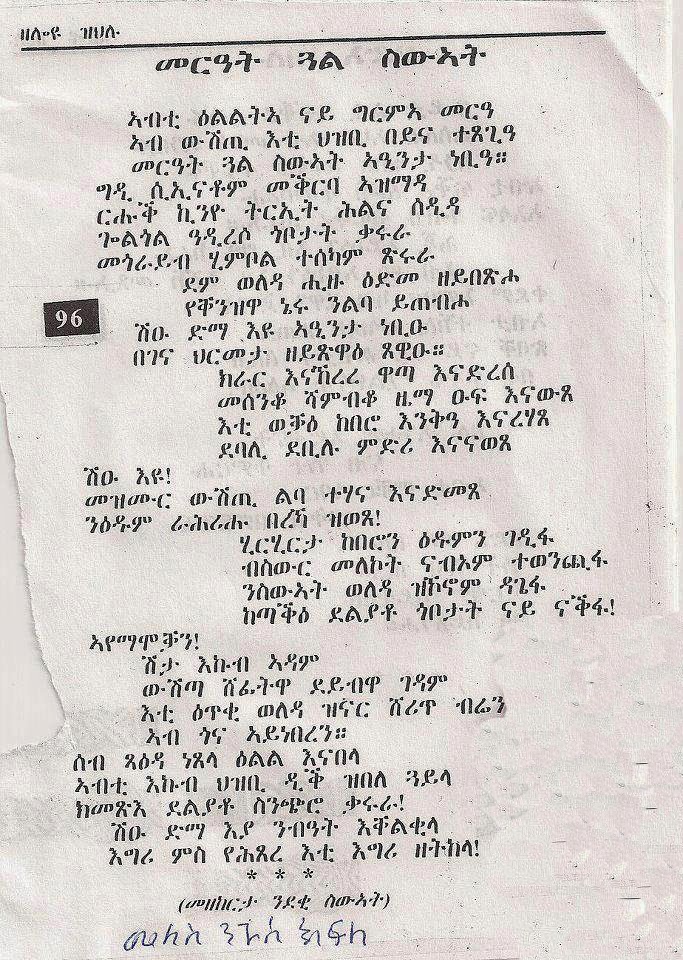