Watching Samuel Mengisteab act in Sophocles’ Oedipus Rex as Teiresias, the blind prophet who reveals a number of things about the characters to develop fully, was really mesmerizing. Although the whole Tigrigna production of the play in 1996 engrossed every audience in its viewings, particularly Samuel appeared a totally blind person and carried the embodiments of the blind prophet (seer) character; let alone those who did not know him before, but also those who knew him took him for a blind person then.
Knowing also that he is active in various literary works, I waited feverishly for his short stories collection book that was launched in mid August 2008. The book is titled “Seb Zseanet Seb” (roughly
translated as “A Loner” with a feminine gender). The title is taken from the title of one of the seven short stories included in the book.
On the preface of the book, Samuel wrote that the stories touch social life and the technique of his writing focused on the characters. “The characters were fi rst created before their themes,” he added.
Bearing in mind that the story from which the book got its title might be a representative of the other stories, I have chosen it to be the focus of this article. “A Loner” is a short story of about 2300 words narrated by a fi rst person point of view. The narrator is a character called Biniam and he recounts his
life with the main character called Zaid.
The story begins: “I always think how cursed the day I got introduced with Zaid was. It is not an excuse I bring because I hate her or am stingy to her or wanted to leave her. I could not bear the stress. She has been drowned in pain in front of my eyes… She is suffering from a serious malady. An illness that has no mercy.” The first paragraph starting from its first sentence grips the attention of a reader and it really drives one to be curious about what is going to unfold in the story.
The narrator reveals that he met Zaid at a night when he was drunk and she was working as a call girl. If you had been around Cinema Dante after eleven or mid-night and have a picture of it in your mind, Samuel’s description of the place Zaid and Biniam met fits with the picture. “I found her standing by a shop veiled the darkness. She had put on a black scarf on her head, a black long dress and good quality shoes carrying an expensive bag.”
The author has also put the description of a snack bar where the two lovers met and talked as follows: “Especially when we talked about our future life sitting at the snack bar whose seats and tables have different colours and the brims of its glasses are chipped….” Regarding the place Biniam moved in to live with Zaid the description goes, “Starting a situation one can neither call marriage nor relationship, up until we live today in her cold house which is full of rats.” These descriptions give readers realistic settings to which the characters are associated and reveal many things about them.
As the author’s main concern were characters in the story, the narrative was carried by the whims, decisions, regrets and caring of the two characters towards each other. Once Samuel created Biniam as a sensitive person who never flinches from his decisions despite the oppositions of his family and friends, all his actions that follow strengthen his traits all the more. Even if Biniam knew that Zaid was a call girl who had already had a child and while living with him often went out to work, sleeping with other men, his love for her never dwindled. The narrator, Biniam, says: “With all her bad attributes I liked her.” He appears to uphold that wisdom that goes as who that loves silver shall not be satisfied with silver. At times the psychological stress that he sustains from caring for her almost drives him to abandon her; however, his unconditional love for her brings him back to stand by her. 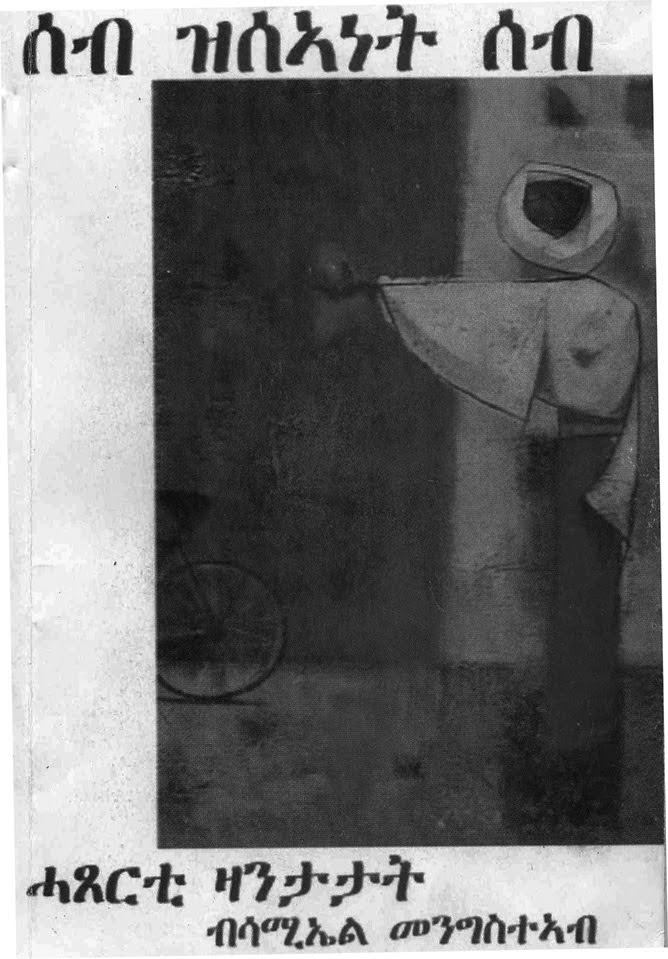 Similarly, Zaid is not repelled by his undivided love for her. With all her past life and the present problem – going through a number of surgeries due to cancer – she wished good things for him. The humility she suffered after her parents sent her out of home for bearing a baby out of wedlock had not turned her callous towards fellow human beings. She is shown as a caring person in such a way that she chooses to sacrifice their love so as to let him lead a life with another woman who had never been married or gave birth to a child. After having left him for a whole day and met him later, she says: “Because I love you, I wanted to leave you alone. I don’t want you to be hurt.”
The author’s characterization with his description and the character’s dialogues shows them to stand out and be easily identifiable. One can feel the pain Zaid goes through because of her cancerous breast, and the stress and worry of Biniam. As Samuel wanted the characters to pass on the theme of the story, it appears that they were able to as he wanted them. He was able to make a point that love is
unconditional and never withers due to time or change of events.
The above being some of the strong sides of the story, it appears to lack a few things. Although it is a point of debate whether a short story’s time span should be of short time or a characters life in an extended time, it is preferable that the story concentrates on a single issue and/or confl ict. When the story introduces a certain conflict, that confl ict serves as a rail leading towards its resolution. In “A Loner”, Samuel introduces us with Biniam’s problem, i.e. his caring for Zaid and worries about her pain.
The plot then heightens when Zaid hints Biniam that she had a secret she wanted to share with him. Then it keeps one’s attention to read on so as to fi nd out what the secret is. In a dramatic irony, a technique where one character knows about something while the other had no idea about the other’s knowledge, the secret is revealed. Then after there is no confl ict that keeps one to go along the story.
As the plot just goes plainly without a climb down, the ending does not ring much. The last sentence of the second paragraph from last goes: “I’m waiting the day she will pass away.” And the last paragraph in its totality is, “What Zaid taught me, though, is a gift of justice that cannot be forgotten for eternity.” Considering the earlier quotation, the story shows no change of events, characters or ideas. For that matter, it feels to lack a resolution.
When we see the relevance of the title “A Loner” to the contents of the story, I found it to be completely the opposite of what I thought it should have been. The title came from what the narrator said towards the end of the story, “…pondering over all she had faced, I could only say, ‘A Loner’”. However, she had already found someone; Biniam has also stated his pledge that he would be with her to the end; he had loved her despite innumerable things that might have made him run away; she has even found him fi t enough to take care of her daughter she had mothered from another man before she met him.
At first reading of the story “A Loner” might drive anyone to say not my cup of tea. I found the characters to speak louder when I read it more than twice. It appears that Samuel’s narrative style has an effect on the flow of the story which many average readers would look for. And the persistent and inconsistent usages of punctuation marks entangle the reading progress to slow down.