When an artist comes up with a work on a subject s/he knows well, there may exist wider opportunity on the artist’s side to bring out the essence of the issue to the public with almost complete picture. When women write works reflecting various social problems that particularly concern them, they could get deep into them more than men writers. They could have immediate relationship and would have full knowledge and awareness of the problems that really matter women.
Ghenet Sium, nicknamed as Shigom after her first autobiographical novella, appears to be one of the Eritrean women writers who is so conscious of women’s plights and has stood up to write against them. In the preface of her 2002 book of short story collection, writing about “Leteberhan” one of her short stories in the collection, Ghenet vented her stand as follows: “I wrote “Leteberhan” while remembering my aunts who went through their lives without kneeling down for male supremacy and bowing down for aristocratic society.”
Moreover, Ghenet indicates that one of the short stories in the above stated collection titled “Chiqa Adi” was first related to her by Mrs. Tsehaytu Asfeha, an elderly woman. She has included in the book the elderly woman’s photo and made clear that the story had been transferred from generations orally. As the title of the book is also driven from that story, I have chosen to make it the focus of this article’s discussion.
“Chiqa Adi” is a short story of about 7500 words. The writer reveals that she added flesh to the story employing her creativity while still keeping the main story intact as she was told by the elderly woman. Chiqa Adi is a Tigrigna word that means village magistrate. The story begins with the physical description of the magistrate and revolves around him. Ghenet inter-weaved the wisdom of village elders in delivering justice and the plights of women which are always unvoiced. The magistrate, being an objective and wise appointee who serves his village judiciously in his capacity, had one human folly leading him to be a serial rapist.
Ghenet’s narrative of how the magistrate serves justice reveals her profound knowledge of the traditional justice system which now appears to have changed. While providing readers with sharp mental judgement of the main character in accomplishing his job, the writer keeps them in touch with the traditional methods of solving problems that gave priority to reconciliation.
In her narrative, the writer included the tradition of young women creating new songs during Pagume – a week before September when young women go to the river for a bath, games and singing early in the morning. Here one of the new songs was a slap in the face to the magistrate for his infamous actions.
Her ample knowledge of the traditions of the Tigrigna ethnic group enables her writing to give a comprehensive picture of the characters’ environment that in turn helps to understand and know them better. In this part, her mastery of the Tigrigna language plays crucial role. Mastery of the language does not only apply to compilation of vocabulary but also applying them in their right contexts. Ghenet’s mastery of language is also reinforced with her usage of telling proverbs that have deep root in the society’s culture and language.
As was stated earlier, Shigom has clearly made known her stand in issues that concern women. She certainly sympathizes and cries with the characters she creates. In “Chiqa Adi”, when the magistrate, the main character, kept on lurking to rape the village women, the authorial comment on his actions clearly takes side stating that the silence of the women who befell the magistrate’s evil deeds was so as their husbands would not divorce them – even if they were not wronged but were only victims; and Shigom summed this up as adding salt on wound. “The silence of many decent women changed the magistrate into a dog,” she writes.
This is a kind of writing which men writers do not usually give heed or consider it as a problem that they should be concerned with. In an article titled “African Motherhood – Myth and Reality” presented by South African writer Lauretta Ngcobo states: “There are no acceptable extenuating circumstances to justify any of [women’s] crimes – adultery, promiscuity, disobedience, a domineering nature – they incur vicious and immediate condemnation and punishment. On the other hand, men guilty of adultery or desertion or cruelty, suffer no severe punishment for these. They are often accepted back by their families, chastened, wiser but forgiven. None die for their mistakes. These attitudes are inculcated into the minds of the young African readers – for these are the books that are read in our schools and which help to perpetuate unfair attitudes towards women.” 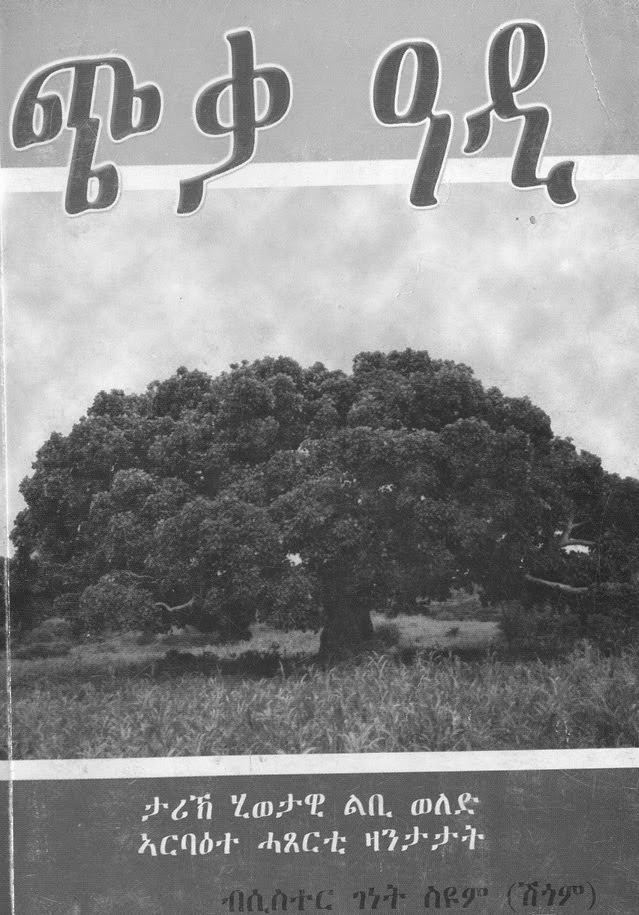 Similarly in “Chiqa Adi”, while the village knew that the magistrate was on a series of hunts of their women, they were not ready to do something about it. It should also be reminded that although the husband of a woman faced by the rapist in an unexpected time facilitated the dramatic ending his wife’s role saves the moment from ending up in debacle. Shigom here glorified the wisdom of women more than their physical beauty – which many men writers would have employed inversely.
Looking into the narrative technique Ghenet used in “Chiqa Adi”, we can point out a few things. Her efforts in developing the main character with descriptions of his physical features and actions were effective. They give complete picture of him. “His looks were closer to a boar than to a human being.” Followed by a detailed description of his lips, teeth. On the other hand, her description of the magistrate’s action: “…he was never pompous because of his authority, never addressed disrespectfully to anyone who came for his service, was very objective, advised the people in conflict to forgive each other…” reveal her sharp observation of elderly people in the process of reconciliation. The same applies with some of the characters in the story.
“Chiqa Adi” begins with the description of the main character and a number of backdrop information about him, such as his name’s meaning in juxtaposition of his looks. The main issue of the story begins on the tenth page although there are a number of foreshadowing before it. As a short story it is usually advisable to grab the attention of readers from the beginning and make them follow the whole story to the end. That appears to lack in this particular story.
In addition to this, the back-and-forth movement of the plot puts a reader in confusion for the sheer weakness of transition techniques in introducing flashbacks.
“Chiqa Adi”, although readable and not difficult to understand, it has some copy editing problems. There are a number of punctuation mark problems especially a very persistent improper usage of exclamation mark. It is important to remember that good works would be better or best if they are also presented with polished misspelled words.
One final remark here is that the writer has indicated on the cover of the book that it is a ‘biographical fiction’. It is very difficult to understand what that means. Literary works known to be biographical or autobiographical are generally described as follows: “Ideally, the writer moulds complex biographical facts—birth and death, education, ambition, conflict, milieu, work, relationship, accident—into a book that has the independent vitality of any creative work but is, at the same time, ‘true to life.’” This is as opposed to fiction works that are products of the imagination with imagined people and events. Therefore, Shigom should decide on which of the two divisions she puts her works.
In general, whether women writers who fight with their pen for the rights of women are called feminists or not, their fight would only succeed when they bring out their problems so as to make their society be aware of them. One would only be naïve to expect male writers to understand women’s problems exactly as the way women feel and suffer from them; even if they may try, it may look superficial or not as profound as that of women writers. It is time that many women writers more of like Ghenet Sium (Shigom) – who is in support of womanhood and gender equity – would come to the centre stage of Eritrean literary works.